I’m going to talk a lot about MoviePass here. No affiliation. I just like the service.

I’m also going to talk a lot about Annihilation. If you haven’t seen it, but still want to, this might be spoiler-y. You’ve been warned.

And if you get lost along the way, don’t worry! I’ve made you a handy pocket guide down at the end of the post, so you’ll know exactly how to chart the waters of Annihilation (insert dramatic music here).

I don’t get it. The popularity escapes me.

Maybe it’s me. Maybe it’s everyone else who saw the movie and thinks they got it–or that they’re supposed to get it. Maybe it’s their fault so many people are lauding this movie.

But I’m here to tell you: they’re confused. Or lying. Or so stunned by the, admittedly, fabulous visual experience that they’re no longer thinking straight.

My husband and I recently went to see Annihilation. We used MoviePass, which is how we’re ranking movies these days. True, we use our MoviePasses whenever we can at the theatre. But when those preview trailers run? Oh, my friend, we turn into the harshest critics, judging movies on a scale of “We’d pay our hard-earned money for that” (clearly a 10) to “I honestly don’t remember what we did with our lives before MoviePass” (clearly a 1).

MoviePass has changed the way we see movies. No longer do we shrug at movies we think will be awful and say, “We’ll wait until it hits Netflix.” Now, we boldly stroll into the theatre, purchase our tickets, and cringe for 90 to 120 minutes, if it’s really that bad. But we cringe without the guilt or displeasure of having spent real dollars. It’s wonderful.

I know there are lots of rumblings about how MoviePass has been–and will continue to be–changing. We’re fickle consumers. If they do something we don’t like, we have no problem walking away from the service. We’ll just go back to judging movies on the Netflix viewability scale instead. Black and white thinking works well for how we’ll deign to spend our free time.

My husband was excited to see Annihilation. I approached it with the same sense I had going into Alien: Covenant, which was basically, “I have a very bad feeling about this.” But along I went, because…well… I was going to say because my husband is my best friend and I’d do anything for him. But really, in this case: because MoviePass.

I won’t attempt to review the entire movie. Lots of folks have already done that, both for better and for worse.

Instead, I’ll give you three thoughts and a final takeaway. 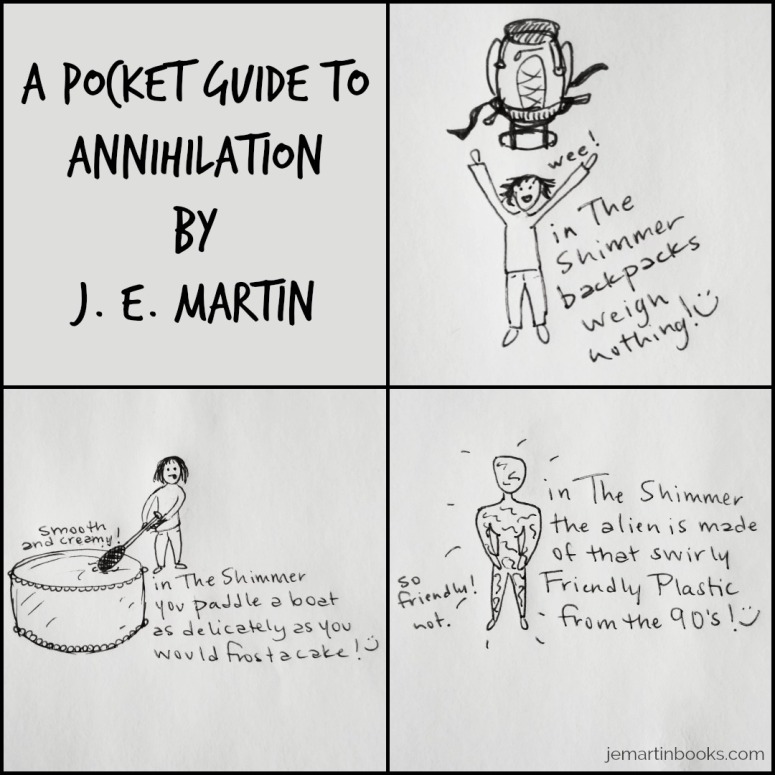 Don’t get me wrong. The film was visually stunning. The reflective shimmer effect subtly touching almost everything within the confines of The Shimmer was lovely. The world building was fantastic and the concept was solid.

The silly points I mentioned above, however, coupled with the wild randomness with which the story progressed? It wasn’t for me. When I look back on it, I can make the argument for the way the story developed. I can see the good points–and the bad points–other (real) reviewers have mentioned. In the end, though, it just seemed like the scale was too small for the expansiveness of the concept.

I also read that the alternate ending tested more poorly than the ending being shown in theatres. That worries me a bit because what’s being shown in theatres just seems a little…well…preachy, really. A classic case of a bit too much. I understood the ending before the actual ending was presented. However, the guy who was sitting behind me–even after what I felt to be the overwhelming obviousness of the ending–had to ask his companion what the ending meant. I’d have preferred the alternate ending. I don’t want to share it here, because spoilers, but if you’re interested in knowing about it, the internet is at your disposal, my friend 😉

As always, you’re free to love what you love. And if you enjoyed (or hated or haven’t seen) Annihilation, I’d love to know your thoughts! The comment box is open just for you.